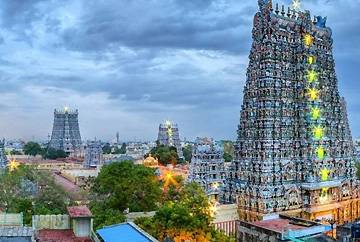 Culturally and historically affluent Tamil Nadu is undoubtedly the reflection of India’s cultural wealth. Cities like Madurai, Kanchipuram, Mahabalipuram and island situated Rameswaram are the usual haunts of the pilgrims. However, it is not only the temples that overwhelm visitors here, making the tip of Indian peninsula; Kanyakumari is also one of the most visited places in Tamil Nadu.

Arrives Madurai met & greet by our representative. Transfer to the Hotel. Madurai is situated on the banks of the river Vaigai. Madurai’s history goes back to the 6th century B.C., when it traded with Greece and Rome. According to legend, drops of nectar fell from Lord Shivas locks on this site so it was named `Madhuram’, Madurai or nectar city. Famous as a temple town, Madurai is also a major industrial city.

Early morning visit Madurai Meenakshi Temple. Madurai has developed encircling the Meenakashi temple built in the Dravidian style – one for Lord Shiva and the other for his spouse Meenakashi. The temple offers lovely kaleidoscopic views. Outside are the musical pillars which produce different `swaras or notes when tapped.

Early Morning, witness the Sunrise from the Thriveni Sangamam. Return back to the hotel for breakfast, Checkout from the hotel & drive to Rameswaram (375kms/7hrs). Rameswaram, is located on Pamban Island separated from mainland India by the Pamban channel and is about 50 kilometres from Mannar Island, Sri Lanka. It is situated in the Gulf of Mannar, at the very tip of the Indian peninsula. Pamban Island, also known as Rameswaram Island, is connected to mainland India by the Pamban Bridge. Together with Varanasi, it is considered to be one of the holiest places in India to Hindus, and part of the Char Dham pilgrimage. According to Hindu mythology, this is the place from where the Hindu god Rama built a bridge, across the sea to Lanka to rescue his wife Sita from her abductor Ravana.

Early Morning by 05.00 AM visit the Temple. Post darshan, back to the hotel for Breakfast. After Breakfast, visit Dhanuskodi (18kms/30-45mins) – the last few miles will be accessible only by Four wheel drive jeeps. Later visit Ramar Patham (Gandhamdhana Parvatham) – marble foot print of Lord Rama, Agnitheertham – sacred stretch of shallow sea, it ie beleived that lord Rama made this to quenched the thirst of Sita by dipping the bow in the sea water.

Post breakfast, Visit Srirangam Sri Renganathaswamy Temple. Later visit Rockfort Temple. Checkout from the hotel & drive to Mahabalipuram (300 kms / 5hrs) On Arrival check in to the hotel. Enjoy the evening in the hotel or spend the time in the beach. Overnight at Mahabalipuram.

After Early breakfast, Departure transfer to Chennai Airport / Railway Station. If you have evening Flight/Train, the whole day is yours – Chennai is famous for Kanchipuram Silk Sarees, Aarani Silk & Mega Garment Stores one day is not enough to visit the big stores. Immerse yourself into the shopping crowd to get the local feel. Later in the evening transfer to Airport/Central Railway Station in time to catch the flight/train.